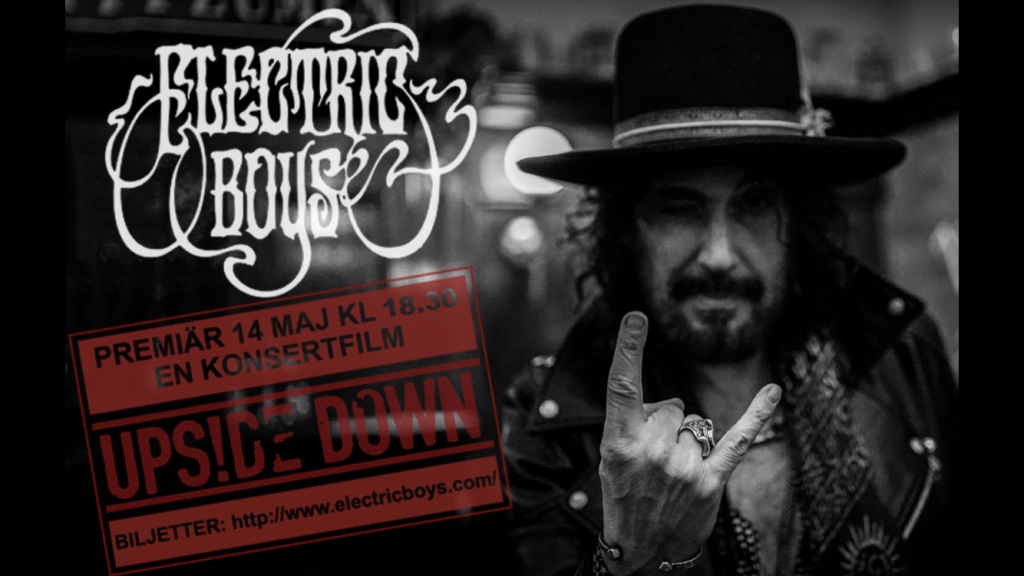 In a time when the pandemic had shut down every possibility for artists playing live, Electric Boys wanted to do something different. On April 8, Electric Boys was located at the Vallentuna theatre. The smoke was lying heavy thru the red/green lights on stage. Oriental carpets and lava lamps were decorating the stage and this is when band invites you to an exclusive show of both new and old songs. We will be taken on a musical riff-journey with Conny Bloom – vocals & guitar, Andy Christell – bass, `Slim` Martin Thomander – guitar and Jolle Atlagic on drums. On this night, Electric Boys wants to pay back back to those who mean the most – their fans! Follow us on a hybrid experience where YOU will stand on a virtual red carpet at the Sonika Studios. Talk directly to the band over the chat forum, ask questions, be a part of an exclusive merchandise raffle and you´ll even be able to request songs played spontaneously by the band. There will be a few other surprises as well. This is not just an ordinary live stream, but something out of the ordinary. This is an intimate, exclusive moment where the band and the viewers will spend time together as the rest of the world is Ups!de Down. You don´t wanna miss this….! Latest album ”Ups!de Down” has been praised with great reviews world-wide from both critics and fans.

”It’s more or less consensual that “Ups!de Down”, the new ELECTRIC BOYS album, will be one of the best rock releases in 2021. Heavily contributing to this are songs such as “Tumblin’ Dominoes”, the new single from the Swedes. Superb melancholic-inducing, almost self-reflective chorus, one of the best bridges in recent rock history, and that groove that Electric Boys master so well.”

– All About The Rock, UK

‘Ups!de Down’ is a feelgood album that comes at perhaps the best time possible: just as light is starting to shine at the end of the seemingly interminable tunnel that has been the past year and a bit, it provides us with a soundtrack for brighter, more optimistic times ahead and tells us, despite the patness of the Government’s catchphrases, we did get through it together…”

Whether he knows it or not – and I am guessing he does – at one point in the “Upside Down” record, Conny Bloom nails the last 32 years of the Electric Boys.” – Maximum Volume Music

Tell us about the video for “Tumblin’ Dominoes”, did it turn out the way you thought it would???

C: Our vision was to make a video that captures the band in a live environment because we’re a live band first and foremost.

The latest “live” video we made was for the song ”Spaced Out” six years ago.

AMy first impression is that this video looks like the stuff I was into as a kid, when I first started listening to music and felt the magic of it.

That is, videos had a lot of intense colors and the impression you get from a big stage.

We watched previous videos from Claudio Marino and we just knew we’d like working with him ‘cuz he’d grasp our vision for lighting and contrasts.

It turned out just the way we wanted it and it’s been so much fun making this video.

What can we expect from the new album?

A: We believe this album’s got a number of great songs with a sort of completeness about it and that every song is like an onward journey, but not in a straight line! The 3 songs that are released already are just ”the tip of the iceberg”.

CThis album will challenge the listener. We wanted to surprise and we have done so by blending in several styles and influences.

We chose to kick it off with a 7 min long instrumental song and put it as the first track, which can be considered to be a ”commercial suicide” given that we’re not an instrumental band…

But considering how the rest of the album sounds, it didn’t fit in anywhere else.

A good song is always a good song and we’ve completed and included all the songs that we felt were qualified. Every song has it’s own story but the lyrics are open to free interpretations.

Have you become bolder over the years?

A: We’ve always been cocky and stood up for our opinions.

If we believe and have an opinion about something we just do it.

C: The previous album”The Ghost Ward Diaries”was a sort of compromise with the band line-up we had at that time, while this one is a natural step forward, mostly because it’s recorded without compromise and done more rapidly.

What impression can we expect from the band’s live performance from now on?

C: We sound better than ever, all the lead and backing vocals are way better than before and we’re ridiculously psyched to get out and play!

Every gig will be different than the previous one.

We will change the set list along the way and if you’re a fan following us on the road you’ll experience, in a way, a new show every day.

During April 8-9, the Electric Boys were in Vallentuna recording a video for their 2nd single release ”Tumblin’ Dominoes” from their upcoming album “Ups!de Down”. At the same time they recorded a Pay Per View production called ”Electric Boys Ups!de Down” which will be premiered on May 14, just 2 weeks after the release of their album with the very same name, on April 30.

This concert film along with the video for “Tumblin’ Dominoes” is made by movie director Claudio Marino (Ghost, Behemoth, Tribulation, Satan Takes A Holiday), photographer Tony Oien (Premiär datum oklart, Veckans brott, Palmemordet etc) doing documentary filming and with executive producer Hilda Sandgren, MTA Production (pioneer in streaming from Bringithome2020 and booking agency) as an executive for the whole production.

Ever since Slim Martin Thomander rejoined the band, many have requested songs from the ”Freewheelin’” era and the band heeded those requests when they made the set list for the Ups!de Down movie.

– – - It’s songs from the forthcoming album along with a few classics and we had such chemistry so we couldn’t resist a great deal of jamming as well.

Because, what do you do when a pandemic comes knocking? Stopping wasn’t an option for us, being creative was. It all ended up with a brand new album that is both rawer and more experimental than the previous one. It’s a kind of EB 2021 update.

We’re staging Electric Boys here and now. We want to be productive and constructive so we’re turning this to our advantage instead. We’re longing for live shows of course, but as long as it isn’t possible, we’re focusing on doing things in new ways. We did a lot of thinking and we decided that doing a live music movie with some documentary clips is something we’ve really wanted to do for a long time! Conny says.

- I’ve put Electric Boys’ music and artistry in a new context. With this production, we’re upgrading the whole digital live experience. We have a 2.0 vision for the band and the live streaming, producer Hilda Sandgren says. 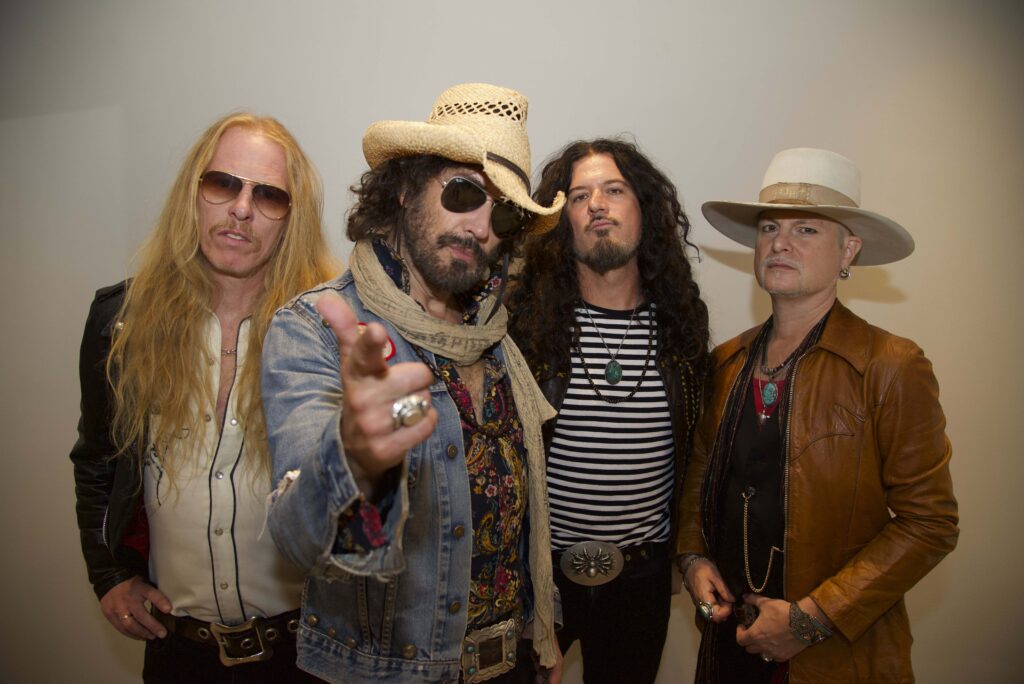 We at MTA are very happy to reveal our new collaboration with rock legends Electric Boys, who are now joining the MTA family and who can already be booked for concerts! The band will be part of MTA's new under-label MTA Rocks.

The band is much loved for its distinctive and eccentric style of music that already left a deep impression on us in 1989 when the debut album "Funk – O Metal Carpet Ride" was released.
Now, the Electric Boys are up to date again with their seventh album "Ups!de Down" where they continue to develop their unique fusion of musical styles to make something of their very, very unique sound.

Electric Boys members are Conny Bloom on guitar and vocals, Andy Christell on bass, 'Slim 'Martin Thomander on guitar and Jolle Atlagic playing drums on the album, as the band's original drummer Niclas Sigevall – still a large part of the band – could not leave LA due to the pandemic.

Reflecting the turbulent times of the past two years, the album was spontaneously and organically shaped into a concept album that addresses adversity and fights the human fighting spirit and the ability to survive even the most difficult situations to find hope and victory in the current circumstances of life.

Overall, the album harnesses the collective consciousness of 2020, while taking advantage of a variety of influences such as Jimi Hendrix, Deep Purple, Bowie, 50's Rock and Roll, late Beatles and even Sisters of Mercy.
Probably the band's latest album is a little less funky than any of the band's previous material, but it's no less eclectic and provides a strong cocktail that reflects the history of rock and roll and the light and darkness of life. "You can see the light at the end of the tunnel rather than just the runaway train" in songs like "This Is Not The End." When things are so big and seem to be out of control, you can turn it around and gain control by letting it go. The free thinking and rebellious spirit of the band are alive and well in this latest album and belief in the power of music's message and its ability to change the world. People often mention to the band that Electric Boys songs have changed their lives and inspired them to take up instruments.

The band says:
"What do you do when a pandemic knocks on the door? Stopping didn't feel like an option for us, the other way was to stay creative. It ended with a new album that became both rawer and more experimental than the last. This is a kind of Electric Boys 2021 update." Electric Boys is booked by Hilda Sandgren hilda@mtaprod.se